“Growing like a weed,” doesn’t begin to cover the pace at which my daughter has shot up.  That 12 month tank top that fit like a dress a month ago suddenly shows the bottom of Jelly Bean’s belly like a fat man’s on Thanksgiving.  She is 10 months old; her 12 month dress shouldn’t reveal her top thigh roll!  All of the generous gift givers before Ellie’s birth contributed her whole wardrobe up to 9 months.  Now that Jelly Bean doesn’t have stacks of size-up clothing sitting around and it is up to mom and dad, she has been busting out of her 6-9 month clothing like biscuits from their can.  Poor baby!  Needless to say, girl had to get some new (better fitting) clothing.

Once this was accomplished (thanks to an amazing trip with Gaga to Once Upon a Child), and all drawers and the closet were cleaned out, I realized I had some extra drawer space where bigger clothing used to be stored and some closet dividers that were no longer accurate, so I could re-do these dividers or buy new closet dividers from Amazon

.  So here is Jelly Bean’s nursery reorganized to better fit our needs now that she is nearly one.  Holy goodness, I cannot believe she is almost one!! 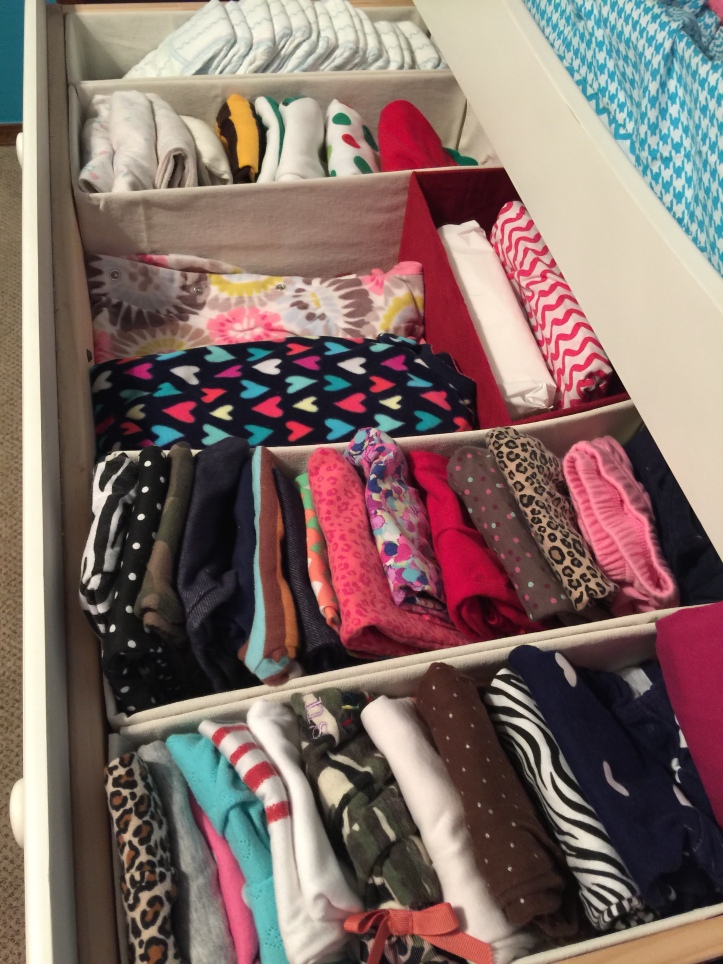 A few items are the same from our first set up, but I have made some space for more frequently used items by removing some fabric boxes

This middle section has changed quite a bit.  Originally, there were burp rags, nose freida, socks, mittens, boppy covers, pad cover, and a diaper pail refill.  Burp rags are still occasionally useful if Jelly Bean is particularly pukey, so one is still stored in the top section along with the extra changing pad cover.  You will also notice that two of the fabric covered boxes were removed.  (I will show you where they went momentarily!)  We found that we usually used the nose freida where ever we had Ellie, so we started storing it in some cubbies we have in the living room.  Additionally, Jelly Bean is too big for the boppy, so we rarely change the cover on it.  We also haven’t used socks or mittens since probably the first month or two of Jelly Bean’s life, so they were relocated to the closet.

With all of that moved, it made space for Ellie’s footy pajamas folded in half twice.  These fluffy pajamas have gotten way to big to be folded in fourths and kept in that pretty line on the left.  It would take up half of the box!!

On the right, I still have two lines of clothing, but the baby beanies that filled the left bin have been removed and replaced with tights/pants folded into thirds.  Then we have the correctly sized (the only thing she has) onesies.

This drawer was mostly too-big clothing when I first organized the nursery.  Since those no longer exist, I have moved a few more helpful items into this drawer.

.  I slip these on Ellie with every dress or really long shirt.  Most infant dresses come with a diaper cover, but they will usually be a pretty basic color so you can mix and match.  Because of how often I use diaper covers, I took them from the fabric box in the closet and put them here, easy to reach.

HARK! The missing box from the top drawer!  My top drawer, large separator box was the perfect size for about three wipe packages.  In the remaining space, I put diaper genie refills.  We buy both wipes and diaper genie refills in bulk, so this is a good place for the extras.  In the bottom skinny slot, I have my rolled up Moby wrap.  We LOVE this thing.  We don’t usually use it in the traditional sense of walks or carrying Els at the grocery store; Ellie likes to “ride” while I do house work or just walk around the house.  When she refuses to play by herself while I get something done, or she is in one of her hold-me moods, I just strap her on and she is as happy as a lark.

On the right, I still have leg warmers, but as you can see there are many more than before.  When it was cold, we loved these because Jelly Bean can still wear summerish stuff while keeping warm.  When winter comes again (I sound like a Stark!), we will be using these frequently.

The too-big clothes are gone, and all the beanie babies have been released from their tiny, cramped, plastic prisons.  Jelly Bean loves to pull open this drawer and throw out each animal.  She is mostly interested in the tags, but we learn the different animals this way.  Her favorites are Heathcliff (not the ty-given name but named after a duck that visits our greenbelt annually) the Mallard and Mystic the unicorn (typical girly choice, and I love it!).  So glad that my mom kept these in a bin from when I was little.  I had to have them all!! 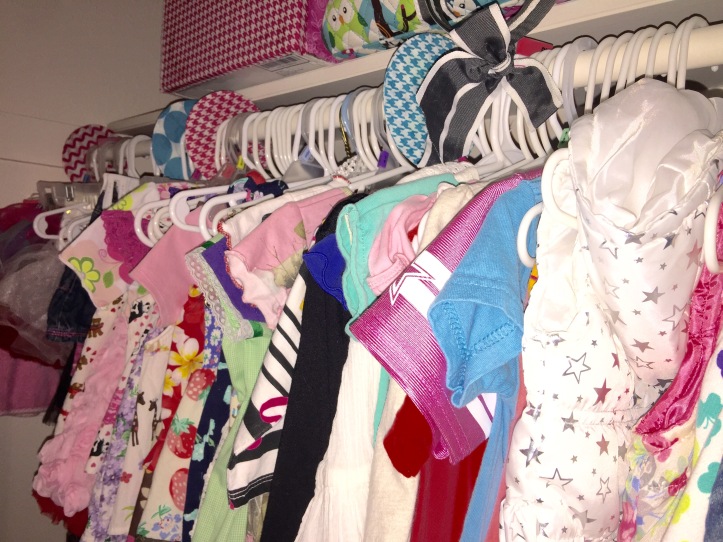 When I initially made the closet dividers, I only wrote the various sizes on one side of the divider (luckily).  Now that there are not varying sizes, I have reorganized the closet into the following categories, which I will eventually write in paint pen on the blank side of the dividers:

The remainder of the closet has not been reorganized and will likely be the subject of another post.  Hope you enjoy my reorganization for an older baby!