How to Make Jello Play-Dough

I wanted to make edible play-dough as the party favor for my daughter’s Jelly Bean Birthday.  That’s when I found this recipe for Jello playdough.  It was perfect to form little edible playdough Jelly Beans as a party favor. 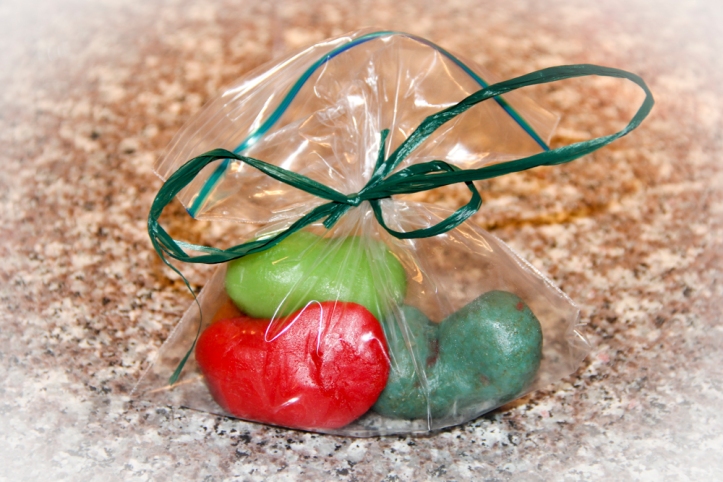 This recipe worked great, but I had a couple of notes on the preparation.  I used vegetable oil; the recipe doesn’t specify.  For flour, I used white unbleached flour for two of the four colors and wheat flour for the other two colors.  The white flour made much brighter-colored Jello play-dough, but the wheat had a thicker, more play-dough-like consistency.  The bright colors were more beautiful but were a bit stickier than the play-dough made with wheat flour, so you can decide which is more important to you and use the appropriate flour type.

Additionally, it took me a lot longer than five to seven minutes of stirring to get to the consistency I desired.  The mixture, at first, seems like a liquid with oil sitting on top, but the more you stir, the thicker it gets.  The mixture starts to clump up, and after several minutes, you are stirring around a clump of dough.  Even once the mixture “pulled away from the side of the pan,” I kept stirring a bit longer, so the Jello play-dough would not be as sticky.

This Jello play-dough is edible, so young mouthing babies and toddlers are safe to put some in their mouths.  I do not suggest letting a child actually eat the dough; it has TONS of salt and is just icky.  If you used sugar-free Jello, it might taste/smell better, but I still wouldn’t suggest consuming large amounts.

Once the colorful, edible Jello play-dough cooled, we formed the various colors into several little Jelly Beans.  I found the best way to do so was to form a ball by rolling the dough around in your palm, then use your middle finger to bottom of palm to squeeze a ring in the middle of the ball while keeping the underside kind of flat (similar to Jelly Bean shapes).

Now you have made an easy infant/toddler party favor that they might actually enjoy!!