I could not wait to make my daughter’s first Halloween costume.  I had seen an adorable chicken costume on Pinterest and decided to adapt it to make an owl.  I originally set out with the idea of a brown owl with a white belly; however, Hobby Lobby did not have brown feather boas, so I switched gears to a baby snow owl.

I started with a hoody found at a second-hand store and five feather boas (four white and one gray cut in half for the different colored belly). 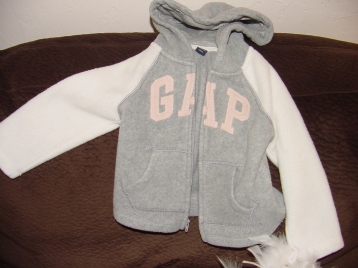 I then used a needle and thread to tack the boas to the hoody.  You can use hot glue for speedier results, but I am thinking I might be able to salvage the hoody and boas after thoroughly using up the costume for all the trunk-or-treat and fall parties we have planned.  If you don’t mind destroying the hoody, hot glue is easier.

I also cut out eyeballs, ears, and a beak from some colored foam sheets we had.  These I glued onto the boas after tacking them down to the hoody.

I tried the outfit on my baby girl once I was finished, and I could not find her inside all the feather fluff!

So I took the hoody to the garage and began to trim using my sheers.  This got feathers EVERYWHERE, but it made the costume a lot cuter and more manageable.  In retrospect, I should have used the little furry boas instead of the huge feather boas.  I topped off the look with black tights and black gloves with rubber bands around the ankles (to look like claws).

This might be the cutest thing I have ever seen!!  The nice thing is, this costume could be adapted to be pretty much any type of bird you desire: Chicken, blackbird, sparrow, dove…the list goes on and on.  Which is your favorite idea?  I decided owl because I have an owl onesie pajama outfit.  We haven’t decided what daddy is going to be.  We have a caterpillar tunnel; I think he should just throw that over himself and be our dinner!